Telemark Chamber Orchestra is a Norwegian string ensemble based in Telemark county. The ensemble has no permanent residence, but works as a touring orchestra in a large area of South Norway. Telemark Chamber Orchestra is the only professional orchestra in the region, and the players are employed on a project-by-project basis. The ensemble usually consists of between 10 and 15 string players, with the addition of other instruments as needed, according to the specific requirements of each individual programme. The orchestra’s members include some of the finest classical musicians in Norway today, who work as freelance musicians, or have parallel careers in other orchestras. TCO is autonomous, and the orchestral members serve on the administrative staff as well as on the Board of Directors.

The artistic leader is Lars-Erik ter Jung, who has held this post since the Orchestra was founded in 1992.

TCO is funded by The Arts Council Norway and Telemark County. 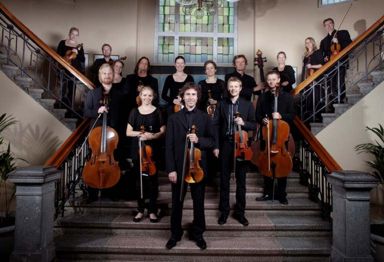 Norwegian conductor, Lars-Erik ter Jung (b. 1957) has worked with major Norwegian orchestras and ensembles, such as the Oslo Philharmonic Orchestra, the Norwegian Radio Orchestra, the Norwegian Chamber Orchestra and the Oslo Sinfonietta. He held the position as principal concertmaster of the Bergen Philharmonic Orchestra from 1982 until 1994. Working as a full-time freelance musician since then, including numerous projects as artistic leader of various ensembles, he has established himself as a sought after and versatile conductor.

Commissioning works by several Norwegian composers has been an important undertaking for Lars-Erik ter Jung, also supported by his role as Artistic Director of the Telemark Chamber Orchestra. Among these premieres with the TCO are a violin concerto by Bjørn Kruse later presented with ter Jung as soloist on the CD “Nostos” (2005), the Chamber Opera “Bench with and without dog” (Hovland/Rørmark) and the last orchestral work, “Concerto da Camera no. 3” by Antonio Bibalo.

Since 2010 Lars-Erik ter Jung is the Chief Conductor of the Kristiansund Symphony Orchestra, and Assistant Conductor with the Sinfonietta Ensemble of the Opera Company of Kristiansund.